African Americans, Slavery, and Abolition | Correspondence and the Homefront | Dissent and Disorder | Genealogy
Illinois in the Civil War | Libraries and Institutions | Lincoln | Miscellaneous | Online Books, Exhibits, Video, and Audio
Regions, Cities, and Towns | Soldiers, Regiments, and Camps | Women | Youth
Documents available for download
The files marked with a , are in portable document format: pdf. You need the Adobe Acrobat Reader to view it. If you do not have this free reader, you may download it by visiting the Adobe website.

Illinois in the Civil War

Bibliography of Published and Printed Illinois Civil War Regimental Sources in the Collections of the Abraham Lincoln Presidential Library, Part I
Journal of Illinois History, Vol. 8:2 by William B. Tubbs

Bibliography of Published and Printed Illinois Civil War Regimental Sources in the Collections of the Abraham LincolnPresidential Library, Part II
Journal of Illinois History, Vol. 9:2 by William B. Tubbs

http://dig.lib.niu.edu/civilwar/about.html
A product of Northern Illinois University Libraries Digitization Unit, this resource brings together primary source materials from a number of libraries, museums and archives. These institutions include the Newberry Library, the Chicago Historical Society and the Illinois State Library.

http://www.idaillinois.org/
Access digital publications available from the Illinois State Library on the Civil War including journals, documents, reports, newspapers and much more.

http://www.civil-war.com/flag.htm
Outstanding site with pictures and information on Civil War flags from Illinois.

http://www.digitalhistory.uh.edu/era.cfm?eraid=7&smtid=1
Civil War Resource Guide hosted by the University of Houston and developed in collaboration with the Chicago Historical Society among others.

http://libguides.niu.edu/civilwar
Vestiges of an Nation Divided: The Civil War’s impact on northern Illinois, on line exhibit.

http://www.il.ngb.army.mil/history/civil%20war/
This site includes a list of battles, information on a number of Illinois Civil War veterans, and articles on topics of interest.

Slavery: Cause and Catalyst of the Civil War
pamphlet from the National Park Service.

I’ve Been Working on the (Underground) Railroad
Historic Illinois, Vol. 22:6

http://www.illinoishistory.gov/lib/AfAmHist.htm
Brief history of African Americans in Illinois from territorial times through the end of the 20th Century.

http://lcweb2.loc.gov/ammem/aaohtml/exhibit/aopart4.html
The African American Odyssey: A Quest for Full Citizenship online exhibit explores black America’s quest for equality from the early national period through the twentieth century. This link takes you to the Civil War section of the exhibition.

http://www.itd.nps.gov/cwss/history/aa_history.htm
A history of African Americans in the Civil War from the National Park Service.

http://newdeal.feri.org/asn/lesson00.htm
“Been Here So Long”: Selections from the WPA American Slave Narratives

Correspondence and the Homefront

Conventions and Sentiments of Civil War Correspondence in the Minto Letters
Journal of Illinois History, Vol. 5:2 by Jill Rebman Martin

“Your work is truly a good one” Illinoisans and Soldiersâ€™ Homes during the Civil War
Journal of Illinois History, Vol. 12:3 by Glenna R. Shroeder-Lein

The Spy Who Came in from the Coalfield: A British Spy in Illinois
Journal of Illinois History, Vol. 10:2 by Joseph Clark

The Charleston Riot and Its Aftermath Civil, Military, and Presidential Responses
Journal of Illinois History, Vol. 7:2 , by Peter J. Barry

http://civilwar.ilgenweb.net/
This site is part of the USGenWeb Project and is largely focused on genealogy. The best feature is the transcribed rosters that are searchable by county and regiment. It also has all the state’s generals along with information on their promotions.http://illinoisgenweb.org/
Civil War genealogy

http://www.ilsos.gov/GenealogyMWeb/ilnavysrch.html
Database from the Illinois State Archives of Illinois Civil War veterans serving in the U. S. Navy

http://www.ngsgenealogy.org/cs/intro_to_civil_war_research
A “how to” site on Civil War genealogy

We have presented only a few of the resources on Lincoln. There are many, many such resources to be easily found on the web.Lincoln’s Neighborhood and the Civil War
document noting neighbors of Lincoln and their Civil War service

http://www.knox.edu/academics/distinctive-programs/lincoln-studies-center/debate-podcasts.html
Rodney Davis and Douglas Wilson of the Lincoln Studies Center at Knox College discuss each of the Lincoln-Douglas debates via podcast.

http://abrahamlincolnandthecivilwar.wordpress.com/
A day-by-day of President Lincoln and the Civil War sponsored by the Lincoln Institute and Lerhman Institute

http://www.youtube.com/watch?v=dfHylwlq9Ow
The legendary “Rebel Yell” rediscovered by the Museum of the Confederacy.

http://www.youtube.com/watch?v=I_iq5yzJ-Dk
Last eye-witness to Lincoln assassination appears on television in 1956. 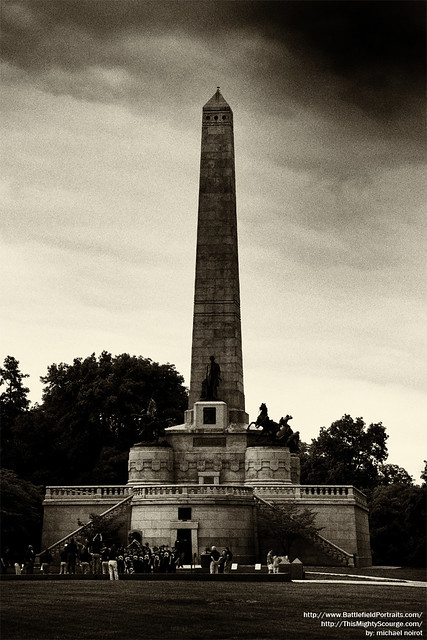 http://civilwar150.longwood.edu/
“That a Nation Might Live,” the Civil War Sesquicentennial one week at a time

http://www.pbs.org/wgbh/americanexperience/films/assassination/
The American Experience presents the Assassination of Abraham Lincoln

http://www.pbs.org/wgbh/americanexperience/films/lee/
The American Experience presents Robert E. Lee, at war with his country and himself

http://www.digitalhistory.uh.edu/exhibits/ahd/index.html
A House Divided: America in the Age of Lincoln

http://www.gilderlehrman.org/collection/online/gettysburg/index.html
“I take up my pen”: Letters from the Civil War

http://civilwaranimated.com/ShilohAnimation.html
Animation of the Battle of Shiloh where General Grant took Forts Henry and Donelson.

Online exhibits from the Smithsonian

http://www2.illinois.gov/alplm/library/programs/boysinblue/Pages/BoysinBlueI.aspx
Highlights of part one of the Boys in Blue exhibit of the Abraham Lincoln Presidential Library

http://cdm16447.contentdm.oclc.org/cdm/.landingpage/collection/p15414coll1
See images of the Boys in Blue collection of Illinois soldiers housed at the Abraham Lincoln Presidential Library

http://collections.carli.illinois.edu
The Southern Illinois University at Carbondale has launched the Southern Illinois Civil War Collection. The digital collection assembles handwritten letters, diaries, and military orders spanning the era before, during, and after the American Civil War (1861-1865). The collection documents the southern Illinois experience of the war, and spotlights life on the home front from the perspective of two women whose husbands served in the Fifth Illinois Cavalry.

http://www.altonweb.com/history/civilwar/index.html
Alton in the Civil War.

http://www.angelfire.com/wi/wisconsin42nd/cairo.html
Information on Cairo in the Civil War

http://www.encyclopedia.chicagohistory.org/pages/2379.html
Encyclopedia of Chicago webpage on Chicago in the Civil War.

http://www.egyptianaaa.org/SI-History2.html
History of Southern Illinois during the Civil War.

“We should have killed them all” The Violent Reaction of Union Soldiers to the Assassination of Abraham Lincoln
Journal of Illinois History, Vol. 10:1 by Steven J. Ramold

http://www.illinoisgenealogy.org/illinois_civil_war_records.htm
Transcriptions from the Report of the Adjutant General of the State of Illinois (1900-1902) original reports are housed at the Illinois State Archives and are available for download.http://www.alplm.org/library/boys_intro.html
The Abraham Lincoln Presidential Library owns around 7000 images of Illinois “Boys in Blue.” This database lists the soldier’s name, regiment, town of residence, and other information.

http://www.illinoiscivilwar.org/units_num.html
List of Illinois regiments including information on Illinoisans serving under other states’ regiments.

http://www.oac.cdlib.org/findaid/ark:/13030/tf8k4006m3
A guide to the collection of six large record books from Company “M” of the 4th Illinois Volunteer Cavalry at Stanford University. It consists of a clothing book, a descriptive roll of the company, morning reports, the record of a general court martial, and an order book.

http://www.10thillinoisvolcavalry.com/
Site of a reenactmment group portraying the 10th Cavalry Regiment, mustered from the counties of Sangamon, Logan and Menard.

http://cdm16447.contentdm.oclc.org/cdm/
Illinois Boys in Blue images. This project includes nearly 600 scanned images of selected, original Illinois Civil War soldier photographs held in the Abraham Lincoln Presidential Libraryâ€™s Audio Visual Collection. Each soldierâ€™s photograph (including front and back images) is accompanied by cataloging information including the soldierâ€™s regiment, company, residence (town and county if known), and in many cases, the studioâ€™s name and location in which the photo was taken. To date, Illinois infantry regiments included in the database are the 7th, 9th, 17th, 33rd, 37th, 56th, 64th, 77th, 86th, and 108th. The 4th Illinois Cavalry is also represented.

http://www.lexingtonillinoisfort.org/Articles/2009/June/MemorialDayRemembered.htm
More on Cashier as well as highlights of the Cashier Historic Home restoration

New York Times blog on women and the Civil War.

Women Soldiers of the Civil War, Pt I

http://americancivilwar.com/women/
Women Soldiers and Nurses of the American Civil War.

http://www.feminist.com/resources/artspeech/remember/rtl6.htm
All is Fair: Women and the American Civil War by Janelle Collett

http://americancivilwar.com/women/women.html
Women of the Civil War

http://dig.lib.niu.edu/civilwar/women.html
Essay on Women and Gender Roles in Civil War Illinois and the North by Drew E. VandeCreek, Ph.D.

http://www2.lhric.org/pocantico/civilwar/cwar.htm
The Civil War for Kids site has a great deal of content created by kids for kidshttp://www.socialstudiesforkids.com/subjects/civilwar.htm
Site presents the Civil War including timelines, glossaries, maps and more.

http://www.whitehousehistory.org/whha_tours/lincoln_whitehouse/index.html
Online game for kids of Lincolnâ€™s White House during the Civil War.

http://www.civilwarhome.com/boysinwar.htm
Boys in the Civil War

http://americanhistory.si.edu/militaryhistory/resources/whoami/whoami_flash.html
Solve mysteries with images and quotes in this online game of Civil War characters